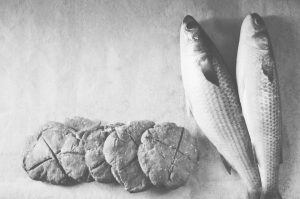 You would think this brief conversation with his disciples is disconnected from the rest of the story, but it’s not. The disciples had no clue what he was talking about, in the same way the woman at the well couldn’t wrap her mind around living water. Food and water? It’s almost as if Jesus is trying to say something profound (that’s sarcasm).

They are two sides of the same coin. Both believing Jesus and doing what he says yield similar results-satisfaction, wholeness, restoration, or in other words never thirsting again and full from food of another kind.

Drink up and have your fill; you will never be disappointed.

The father cried, “I believe; help my unbelief!” Believe what exactly? In this case, it seems clear. Jesus was inviting him to believe in Him, that he was able to bring lasting change and new life in the most desperate situation, i.e the life of his demon possessed son. There is no doubt that God expects us to believe that he brings victory into our life through His Son Jesus, but what if God is also inviting us to believe something else, or at least a nuanced belief?

What if He is inviting us to believe that He can even use us to bring new life and hope to others in desperate need? What if he not only wants to do something in you, but also through you? Do you believe that? I do.

Lord, I believe; help my unbelief.

Abraham’s story is a remarkable one. He was rough around the edges, but when it counted he did some extraordinary things. There is no wonder that God chose him to be the father of nations,…except that is not the story at all. The glorious hero in this story is not Abraham, but God. God sovereignly made a promise to Abraham, to provide him a son, make him a father of nations, ultimately blessing the whole world, and Abraham “fully convinced that God was able to do what He promised,” believed Him. This remarkable story of faith is not about God’s confidence in choosing the right person for the task, but Abraham’s confidence, or faith, in God. It was at that moment, when Abraham was “fully convinced,” before he had obeyed God even once, that God credited his faith as righteousness.

“The righteous will live by faith.” Will you? Will you follow hard after Jesus, not because you are fighting for His approval, but because you believe what he was promised? Let’s believe together, and take great steps of faith!