Simon Peter went up and drew the net to land, full of large fish, a hundred and fifty-three; and although there were so many, the net was not torn. (John 21:11)

153 was a remarkable haul of fish and an unusually exact record.  Many scholars have conjured up hypotheses to explain the exact accounting, but it seems the logical explanation is that the number 153 has no ulterior meaning.  It was just a bunch of fish.

Just imagine, if Jesus points His disciples to a bunch of fish on an impromptu fishing trip, how much more will Jesus point these fishers of men to people ready for the Gospel.  Like fish shoaling near a boat there are many like Zaccheus (Lk 19) or the Ethiopian Eunuch (Acts 8) who long for the Gospel that Jesus Christ can point His followers to.

May our nets be full of those ready to follow Jesus Christ. 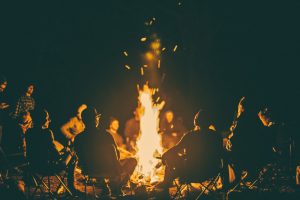 John concludes his Gospel alluding to the wealth of activity and teaching of Jesus that simply would not fit in his book. What I find amazing is, instead of including something more glamorous, John chooses to include these simple and intimate final moments with Jesus by a campfire. They are not necessarily spectacular; after all, we’ve seen Jesus do that thing he does with fish before, so why include THEM?

If eternal life is to know the one true God and the one who he has sent, Jesus Christ, then these last few moments with these seven disciples make so much sense.  They are a picture of closeness and knowingness. It is in these simple intimate moments that Jesus reminds them of who He is and who they are.

Sometimes we look for the profound in the glamorous, when what we need are simple intimate moments with Jesus. When we find ourselves there, we discover once again who we really are because we are reminded of who He is.

In the middle of restoring Peter, Jesus has amazing words of comfort and clarity for His followers and those who would lead them. It’s the pronoun Jesus uses when He commissions Peter (My). Jesus leaves no doubt or confusion about the ownership and belonging of His sheep.  They/we belong to Jesus. There is such security and confidence in His statement.  We belong to Him. He takes this facet of our relationship with Him seriously. So much so, that He provides under-shepherds to feed and lead His sheep.  But, make no mistake, the sheep belong to Christ.  What joy!  What Peace!  What encouragement!  To rest in the knowledge and understanding that we belong to Jesus!

God does not need us to do His work for Him, but He chooses to allow us to join Him in His work.  The disciples had been fishing all night, without success.  Jesus appears on the shore and tells them to cast their nets on the right-hand side of the boat.  What an amazing catch!  When the disciples arrived to shore though, Jesus already had fish on the fire for breakfast.  He did not need the disciples’ fish, but He invited them to bring some of their own.

In John 14:12, Jesus spoke of greater works that His disciples would do when He went to the Father.  Here in chapter 21, the disciples have many more fish than Jesus…but at His word!  They exceeded His work, but in His power!

There is work to be done in God’s kingdom.  We must join Him in His work.  When we work, in the power of Christ, we will have a great harvest for the kingdom.  Henry Blackaby has said, “find where God is at work, and join Him in it!”

“Come and have breakfast.”

The firstborn over all creation, the image of the invisible God, the Alpha and the Omega, Beginning and the End, the crucified and risen Messiah who conquered death and the grave—built a fire and cooked some fish for his hungry friends. This isn’t Undercover Boss, this isn’t the compassionate CEO standing in solidarity with his employees, this isn’t the politician chewing the fat in a small-town diner to wow the folks and rustle up some votes. This is Jesus living with the people he loves. And that’s the point of his salvific work. If sin and death will stop early morning cookouts on the shore—and they will most assuredly stop them—sin and death will stop everything. Life is rich because of these small hours, and the Lord has made sure those hours will never end.

And there are also many other things which Jesus did, which if they *were written in detail, I suppose that even the world itself would not contain the books that would be written. vs. 25

John helps put in perspective the life and ministry of Jesus Christ in this last verse of his gospel account. Lest we think that we can read every word and miracle that Jesus uttered or performed. Scripture is indeed sufficient, but we can rest assured that Jesus was always about his father’s business. When others aren’t watching can that be said of you? At home, with family, at work, or worship the call is the same. We are here to proclaim Jesus until he returns.

At the time of this recording, Pastor Chris was out of town…what shenanigans will Aaron and Bryan get into? Join us as they walk us through John 21.

Twice in this week’s text Jesus speaks peace over His disciples (v.19, 21).  Peace was, and still is a personal greeting in the Middle East, but this was far more than a “hello”.  In this salutation Jesus’ creative voice calms fears and drives evil away just like His voice stilled the choppy waters on the Sea of Galilee.

Tucked away in a locked room the disciples were afraid of what was next, much like we fear our unknown futures or a perceived difficulty that lies in front of us.  However, whatever may be next for you, God is well aware of the hurdles ahead and remains the author of peace for those that are His.

No one expected this. No one. Not even after he told them so. Not after Jesus did the impossible in raising Lazarus, and Talitha, and a young man from Nane from the dead. Not to mention the countless miracles. Not in a million years did they expect Jesus to come out of that tomb.

The resurrection is the firstborn of an untold number of unexpected moments, i.e children of wrath becoming children of God. And yet to this day, we still struggle to belief He can bring dead things to life. He can and he does, like marriages or people you never thought could change.

The resurrection is why we cling to hope, even when there seems to be no way. He is the way.

“Father, we believe, but help our unbelief!”

And they said to her, “Woman, why are you weeping?” She said to them, “Because they have taken away my Lord, and I do not know where they have laid Him.”

What really convinced Mary that Jesus was alive?  His voice- encouraging, penetrating, missionary, and relational.

It’s the same with us. What convicts and convinces us that Jesus is alive? It is His voice- personal, prophetic, powerful. He calls us by name and we are awakened to the reality and glory of a resurrected Savior

When he has brought out all his own, he goes before them, and the sheep follow him, for they know his voice. John 10:4