When God calls us to a Sabbath rest many respond that we are too busy to rest.  We try to devise ways to turn 7 days into 8, while God asks us to turn 7 days into 6. Two books that have been particularly helpful for me on this issue are The Contemplative Pastor by Eugene Peterson and The Tyranny of the Urgent by Charles E. Hummel.

Both of these works set forth a way to turn busyness into a productiveness that allows a Sabbath.  As Peterson puts it we are too busy because we are prideful (wanting to do everything ourselves) or because we are lazy (and let everyone else in our lives determine our schedule), but there is a way to Sabbath rest if we will be intentional with our lives and seek first His Kingdom and His righteousness.

This wonderful command takes into account two human frailties, our ability to only do one thing at a time (as compared to God), and the fractured nature of our minds. The aim of God’s prescribed rest is joy; joy in God, family, and the fruit of our labor. During a week of labor it is hard to slow down long enough to enjoy anything, much less focus or rest. So God says, “Rest…take time to enjoy me and one another, and whether a lot or little enjoy the fruit of your hard work.”

Jesus got so bent out of shape with the Pharisees because they completely sucked any joy or rest to be had in the Sabath. It became more work. So, remember God commands us slow down to enjoy what he has done.

Don’t take the joy out of your rest!

There many instances where the scriptures are not kind to the human race.  We see people (just like us) with flaws and weaknesses. We read about moral failure, disobedience, and pride (all are sin) in some of our most beloved bible characters. Exodus 20 is no exception.  We are commanded to remember the sabbath.  Seems to me, if I had heard the voice of God speak these words, I would never forget them much less forget to follow them.  Yet, the premise is that we will forget.  And, we have. What are other qualities and promises of God we forget?  His faithfulness? His loving kindness? His patience? His power? His holiness?… to name a few.

How important is this command to rest and set apart a day for attention and affection for God?  It’s important enough that He would firmly tell us not to forget!

Perhaps spending some time to remember (journal these)things in scripture (God’s nature and character, God’s promises, God’s warnings, God’s commandments) that are significant to the strength and formation of our faith and the depth of our understanding and relationship with God, would be a valuable exercise today.

The rules governing the Sabbath day were frequently a point of challenge between the Pharisees and Jesus.  The Pharisees had developed hundreds of laws of their own design that governed this holy day.  Were these extensive restrictions God’s plan for this commandment?

In Matthew 12:1-8 and Mark 2:23-28, Jesus told the Pharisees that he was Lord of the Sabbath; that the Sabbath was made for man, not man for the Sabbath.  Jesus was in direct conflict with the man-made religious systems (think cleansing of the temple) of His day.  The light of Truth penetrated the false teaching of the hypocrites that were creating an idol of worship over God’s authority.  Jesus referenced the prophet Hosea saying God values compassion rather than sacrifice.

Are there areas of your life where you have added to God’s Word and given divine authority to the devices of your own reasoning?  Repent and return to the simple commands of divine truth!

“You shall not do any work.”

Some work needs to be left undone. The work you leave unfinished creates a space for someone else to think, to speak, to act. When that happens, continued work becomes a shared engagement instead of a solo project, shaping character in ways that isolation cannot. Work done in isolation invites pride, while shared work cultivates humility. Isolation encourages denial of painful flaws, while shared work necessitates honest conversations. Isolation propagates your own weaknesses, while shared work builds robustness. Isolation convinces you of your indispensability, while shared work reveals to others your worth. Heeding this command results in a less lonely work space.

“Remember the sabbath day, to keep it holy. Six days you shall labor and do all your work, but the seventh day is a sabbath of the Lord your God; in it you shall not do any work, you or your son or your daughter, your male or your female servant or your cattle or your sojourner who stays with you. For in six days the Lord made the heavens and the earth, the sea and all that is in them, and rested on the seventh day; therefore the Lord blessed the sabbath day and made it holy.

I have sat looking at those two words for several minutes. What comes most to my mind is indictment. I struggle to understand holy rest.  I get exhaustion and general fatigue, but not a regularly recurring respite from the world. If I’m really honest it sounds lazy. That is my confession, but it comes by way of a cultural understanding that there are many that struggle with Sabbath. One of the chronic conditions facing many Americans today is  poor mental health. There is no simple fix, but as believers I would challenge everyone to consider how we are treating this commandment and what the consequences are for us and our children. Why is something so seemingly easy, so dreadfully hard for us to obey? Talk with your family today. How are you going to actively pursue rest?

Jesus’ name is as powerful as it gets.  By His name we believe, we are baptized, we prophesy, we work mighty deeds, we heal, and we thrive.  Jesus’ name is not an incantation though, it is a relationship.  The sons of Sceva learned this lesson in Acts 19:

But also some of the Jewish exorcists, who went from place to place, attempted to name over those who had the evil spirits the name of the Lord Jesus, saying, “I adjure you by Jesus whom Paul preaches.” Seven sons of one Sceva, a Jewish chief priest, were doing this. And the evil spirit answered and said to them, “I recognize Jesus, and I know about Paul, but who are you?”(Acts 19:13-15)

The authority of the Creator of the universe is bound up in His name that His children bear, may we cherish this relationship and live in the boldness of the name of Christ. 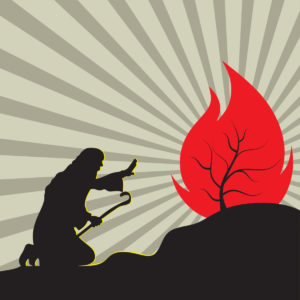 I changed my name when I was 16. Growing up I went by my middle name, but decided to go by my first name at the beginning of my junior year. There simply were too many other “Mikes” in the same dorm; I wanted to be set apart. Names offer distinction, separateness.

When God tells Moses His name at the burning bush that’s exactly what His name accomplishes. There is none like him, there never was, nor will there ever be. God’s name embodies His otherness, His holiness. This is precisely why he commands us to never take it for granted.

Often, when God gives a negative commandment we tend to think God is limiting us, invading our free will, or cramping our style. Actually a negative command offers more freedom than a positive one. A negative command instructs us not to do one thing but leave many other possibilities. A positive command tells us we are to do only one thing. So, when God says don’t take the LORD’S Name in vain, there are many other ways to use and speak His name properly: praise, honor, blessing, celebration, prayer, thanksgiving, glorifying, and trusting, and revering to name a few. Some Jews won’t even use God’s Name at all for fear of breaking this commandment. Aren’t you glad for the freedom to use His Name properly??